Consider This – State of the Union

After a 35-day standoff, shutting down the government, and the associated posturing between the legislative and executive branches at the federal level, the annual State of the Union Address was given earlier this week. And, of course, everyone is discussing it in detail now that all is said and done. From national media, to local talk shows, the analysis and posturing resumes between those for and against this administration.

There were certainly moments where there were appearances of bipartisan unity as Trump spoke about how successful the country was performing. From improving employment numbers to reducing crime rates and welfare dependencies, the hour-plus was spent attempting to promote the well-being of the nation, and how much good has happened in the past year. As per everything Trump does and says, the analysis afterwards showed the varying levels of “truthiness” in his talking points. Most came across as less than truthful – numbers inflated to appear higher than actually reported, taking credit for projects and programs which weren’t actually part of the Trump agenda – and, of course, the threat analysis of the southern border and nations overseas which doesn’t quite match up against what the intelligence community says.

Looking over the sea of colors attending – both skin tone and clothing – it was obvious there was a group standing out in solidarity against what the administration has tried to push up until now. A modern suffragette movement, the women in white joined together to represent the ideals of gender equality, a commitment to women’s rights and the agenda to promote these ideals in the coming legislative sessions. It was a striking difference from those surrounding them, something which sparked a lot of talk throughout the televised event.

Consider this – how good is the country, really?

This was not a “home run” speech. Some might consider it as such, since Trump asked for bipartisan support, but just as the applause towards him was an empty promise of support, so were his words an empty promise of compromise and negotiation. There was little mention of the shutdown, really, other than the threat of doing it again if there wasn’t a new spending bill in the next week. Likewise, Trump’s references to pending trade deals was a bit more forward thinking than actually occurring. His new “NAFTA” is more of a rehash of what was originally in place, with very little substantial change in its substance. And the agreement with the Chinese is even more smoke and mirrors than ever before.

The State of the Union was not viewed with as much enthusiasm – nor did it have the viewership on television or internet media – as others in previous years. Trump’s posturing did not take the wind out of the sails of his opposition. Instead, the knowing looks, nods, and smiles from the audience showed there is a building momentum against Trump now more than ever.

One thing that really stuck out to a lot of people was Trump’s claim that, “America will never be a socialist country.” Yet, ever since FDR’s “New Deal” efforts in the 1930s, this country has actually moved closer to being socialist than most people realize – or understand. We all need to understand what “socialism” actually means, and how it can vary under different government structures; most only understand what the simple term represents under Marxist ideals as defined in the books Das Kapital and The Communist Manifesto. As with most ideas and ideals, they can evolve over time. The graphic currently circulating online (original source unknown) shows the three prevalent ideas of modern socialism: 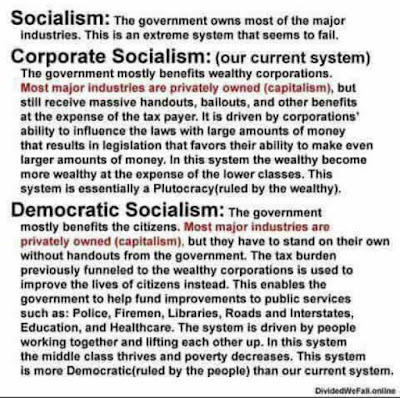 While Marx’s original idea of Socialism has not become the successful ideology and incubation system of his ultimate goal of Communism, the two subsequent variations have certainly taken hold across the globe. Corporate Socialism as we have in this country, is currently holding onto its power due to the continuous gathering of wealth by the corporations and “one-percenters” – at the expense of the widening divide between the wealthy and working class. Also, their fear of the word “socialism” is what pushes that divide further, as most people still consider any socialist nation the enemy – with the failure of the USSR and continued strife in other dictatorial regimes which claim to be socialist being the catalyst for their fear-mongering. Democratic Socialism is the successful melding of a democratic, capitalist economy, with the social responsibility of a people-oriented, socialist society. It is that key word, “Democratic” which tends to be dropped from most conversations in order to scare others into maintaining the status quo of our current republic.

Arguments can go back and forth about how to govern, what to regulate, and where we should be heading, but it won’t solve the inherent issues faced by the country or the world.

Perhaps, instead of all of the unchecked corporate greed and political power currently in place, we should consider the change in dynamic to one of MA&PA – Morally Aware & Public Accountability. We need to be less concerned with amassing monetary wealth, hoarding it to excess, and more aware and accountable to the people of our communities, nation, and the world around us. 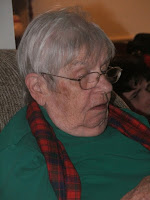